The spacecraft test plant is the main site for the development, testing and final assembly of satellites and spacecraft. The internal lighting environment plays a very important role in the safe and orderly operation of the model test. The lighting system is an important guarantee for providing a bright and comfortable lighting environment. . In recent years, with the continuous development of China's aerospace industry, in order to meet the needs of the growing number of model tasks, the construction scale of the spacecraft test plant has gradually expanded, and the configuration of the test plant lighting equipment has also increased, and the energy consumption of the lighting system. It is getting bigger and bigger. Therefore, how to save energy and build a green spacecraft test plant is becoming more and more important. For high-rise factory lighting products, with the rapid development of LED light source technology in recent years, the application of LED light source to high-rise factory lighting products has become a vigorous development direction of the light source industry.

At present, the spacecraft test plant lighting system mainly uses high-power high-pressure sodium lamp and metal halide lamp (metal halide lamp) dual-source combination lamp, the lamp position is about 20m from the landmark height, up to 25m. Due to the replacement of the lamps, the original dual-light source products are difficult to purchase, and the dual-light source system has a series of problems such as large heat generation, frequent burning of the lamps, and difficulty in maintenance and replacement. Some dual-source lamps have been replaced by single-source (metal halide) lamps. Although the single-source lighting system solves some of the problems of the dual-source lighting system, there are still some problems as follows:

3) Short life. The theoretical life of high-pressure sodium lamps and metal halide lamps is about 5,000 hours, but factors such as voltage fluctuations, ambient temperature, and ignition time will affect the service life of lamps. Due to the high temperature inside the ceiling of the test plant, the heat dissipation of the lamp itself is poor, and the use requirement of â€œclosed at least 15 minutes per week after 24 hours of continuous ignitionâ€ is not achieved, so the actual service life of the lamp is much lower than 5000 hours. . According to statistics, the annual burning rate of lamps and ballasts of lamps is as high as 30%.

4) There are security risks. Due to the large amount of heat generated after the metal halide lamp and the ballast are ignited, the heat dissipation of the lamp itself is poor, and the temperature inside the ceiling of the test plant is too high, so that the insulation performance of the lamps, cables and other components is degraded, and there is a fire hazard; in the replacement and maintenance There are safety hazards in the high-altitude operation of the luminaire.

LED is an abbreviation for "light-emitting diode", which is an electronic device that converts electrical energy into light energy and has the characteristics of a diode. Under certain conditions, it also has luminescent properties. When a forward voltage is applied to the PN junction of the light-emitting diode, the electrons in the high-energy state and the cavity will recombine and release the excess energy and emit it in the form of luminescence. Convert electricity directly into light energy.

As a new type of lighting fixture, LED lamps have great advantages over traditional lamps. The main advantages are:

1) High luminous efficiency. The incandescent lighting effect is 12-24lm/w, and the fluorescent lamp is 50-70lm/w. Most of the power consumption becomes heat loss, and the LED light effect can reach 50-200lm/w, and the monochromaticity of the light is good, and the spectrum is narrow. No need to filter, can directly emit colored visible light.

2) Energy saving. LED single tube power 0.03-0.06w, using DC drive, single tube drive voltage 1.5-3.5v. The current is 15-18mA, which reflects the high speed and can be operated at high frequency. In the case of the same lighting effect, the power consumption is one ten thousandth of the incandescent lamp and one-half of the fluorescent lamp.

3) Long life. Incandescent lamps and fluorescent lamps are characterized by electronic radiation, easy filament burning, thermal deposition, and light attenuation. The LED lamps are small in size, light in weight, and encapsulated in epoxy resin. They can withstand high mechanical shock and vibration, are not easily broken, and have an average life. Up to 100,000 hours, more than 10 times longer than traditional light sources. The life of LED lamps can reach 5-10 years, which can greatly reduce the maintenance cost of lamps and avoid frequent lamp replacement.

4) Strong safety and reliability. LED luminaires are completely encapsulated in epoxy resin, and there are no shortcomings such as filament luminescence, heat deposition, and light decay. Low calorific value, no heat radiation, precise control of light type and illuminating angle, light color, glare, mercury-free, sodium and other substances that may be harmful to health.

LED lighting is widely used in landscape lighting, and the technology is relatively mature, but its application in tall buildings is still in its infancy. In order to ensure a good harvesting effect, the application installation will be carried out in stages, strictly in accordance with the program demonstration, product installation, illumination test, and data analysis.

The installation adopts the method of maintaining the same number and position of the original lamp holes, and installing the LED high suspension lamp with the original ceiling embedded concealed installation. The lamp position plan is shown in Fig. 2. The control methods and wires of the lamps are not changed. 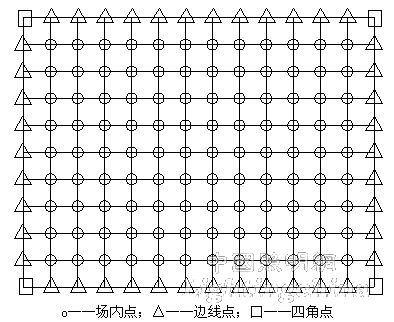 data analysis. The contrast measurement value is calculated according to the calculation formula of the four-corner point method to calculate the average illuminance and illuminance uniformity, and the parameters, lighting effects and energy-saving benefits of different lamps are analyzed in detail.

The average illuminance of the four-point dot method is calculated according to formula (1):

M - the number of vertical grids;

N - the number of horizontal grids;

Eâ–¡â€”â€”the illuminance of the measuring points at the four corners of the test area, in lux (1x);

EÎ”â€”â€”In addition to Eâ–¡, the illuminance of the measuring points on the four outer sides, the unit is lux (1x);

Eo - the illuminance of the measuring points within the four outer sides, in lux (1x).

The illuminance uniformity is calculated according to formula (2):

The calculation results show that the maximum illumination of the working surface is 470 lx and the average illumination reaches 310lx after the LED high suspension lamp. It can be seen that the lighting quality of the test plant has been significantly improved, which not only ensures that the illuminance value of the test plant meets the QJ574-93 "Satellite Assembly Safety Requirements", but also the color temperature and color rendering index are more pleasant, and the color difference will not change for a long time without color cast. phenomenon.

After calculation, in the case of ensuring the illuminance requirements of the test plant, the electric power of the new LED lamps is greatly reduced, the power saving rate is as high as 62.5%, and the energy saving benefit analysis is shown in Table 2. The electricity cost is saved to the utmost, and the life of the new lamps is doubled. The extension has greatly reduced the manpower and material cost of lamp repair and replacement.

With the rapid development of LED light source technology, the application of LED light source in high-rise buildings has also made great progress. It not only improved the lighting environment of the spacecraft test plant, but also accelerated the replacement of old electrical equipment and backward technology. It can also greatly improve energy efficiency and greatly reduce energy consumption, thus effectively escorting model tests and making it limited. The energy is used for more scientific research and production. If LED lighting technology and dimming technology are combined in the future, the application of LED technology in the spacecraft test plant will surely be further developed.

Why we need a battery tester?

A car battery dies, you replace or charge it, but it is hard to know when the battery is going to die. This 12 volt digital battery tester gives you the information about the life of your batteries, instead of guessing, or vaguely remembering. It also allows you to test a battery to see if the problem is the battery or your charging system before spending money for replacing parts unnecessarily.

GOOD BATTERY: The battery is in good condition.

GOOD-RECHARGE: The battery is in good condition but low current. Fully charge the battery and return it to service.

BAD CELL-REPLACE: The battery may be damaged such as broken cell or short circuit. Replace the battery and retest