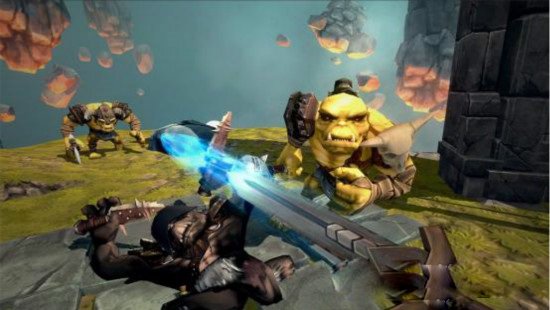 This is an action game that deals with wave after wave of attacks, so as the level increases, the number and difficulty of enemies will continue to increase. Currently "Magic VR" is set up in three modes, Common, Warriors, and Legendary. Normal mode will introduce the player to the game settings, which will help new players and any players who are new to VR. The Warrior mode is a normal standard difficulty, challenging the player who is familiar with VR. The legendary level is for players who really want to fully meet the challenge and have the courage to try.

For this preemptive version, Sky Arena will make changes for each level, so there is no convenience for pre-understanding for the future gaming experience, and the final version of "Magic VR" also includes procedurally generated levels. There are currently eight different types of enemies, each with its own set of skills. In order to defeat the enemy, the player can choose a fighting weapon, a bow that can shoot three arrows at the same time, or a magic sword.

At the same time, when the full version is released in 2017, "Magic VR" will also contain stories about upgrading and explaining the plot. Players can collect interactive real-life simulations of â€œmemoryâ€ and uncover background stories that lead to endings.

If "Magic VR" is your favorite type of game, it's time to act. The current 15% discount will continue until August 19, when the price will drop from 6.99 pounds to 5.94 pounds. However, developers also said: "The full price of the game will be higher, and will continue to grow as the development process and changes in the progress of the game."

The operation of Automatic Guided Vehicles (AGVs) requires high utilization of these vehicles in order to achieve an optimum of profitability. Often, recharge of the batteries which are required for the drive of the AGVs, presents a problem.

The development of powerful batteries, which allow for quick recharge within seconds, enables the integration of charging contacts into the production cycle without removing the AGVs from the production process.

Battery charging stations may be installed anywhere within the system where the production process allows the AGV to stop (staging areas, turn arounds, loading stops etc.).