White LEDs are more and more widely used because they have many advantages that traditional light sources do not have, such as long life, power saving, dimming control, vibration resistance, low voltage driving, and no environmental pollution. ]. At present, the most mature white LEDs use blue LEDs to excite yellow light phosphors to produce white light. In addition, violet or near-ultraviolet LEDs can be used to excite red, green and blue phosphors to produce white light [2-7]. The YAG phosphor suitable for blue light excitation is a relatively mature phosphor. The first commercial white LED is obtained by Japan Nichia Corporation in blue chip and YAG package. However, the color rendering index is not high, strictly speaking, it does not meet the lighting standards. In recent years, there have been many reports on nitride phosphors [8-13]. These phosphors are more difficult to synthesize under high temperature and pressure. In addition, phosphors of the silicate series which are easier to synthesize have been developed [14, 15]. However, there are not many related reports at present.

For further research. Ho Seong Jang et al. [13] reported a Sr3SiO5:Ce3 +, Li+ yellow phosphor. A white LED can be obtained by exciting the phosphor with a 405 nm or 460 nm LED chip. The efficiency of the white LED obtained by using it and the blue chip package is 31. 7 lm /W, Ra = 81, Tc = 6 857 K, and the color coordinate is (x, y) = (0. 308 6, 0. 316 7). On this basis, a small amount of Ba was used to replace Sr in Sr3SiO5. It was found that the emission peak red shifted with the increase of Ba doping content, from 541. 12nm red to 553. 75 nm. In addition, Joung Kyu Park et al. [14] reported that the partial shift of Sr with Ba in Sr3SiO5:Eu can red shift the emission spectrum. Based on this, the effect of replacing Sr with different alkaline earth metals was studied. In addition, the effect of doping different amounts of Eu on the emission intensity in the (SrBa)3SiO5 matrix was also investigated.

Such phosphors are synthesized by a high temperature solid phase method. The reagents used in the experiment were SrCO3(AR), Li2CO3(AR), MgO(AR), CaCO3(AR), BaCO3(AR), SiO2(AR), Eu2O3 (99.99%), CeO2(AR). The experimental design components are: A: (SrBa)3SiO5:0. 024Ce3 +, 0. 024Li+; B: Sr2. 73M0. 2SiO5:0. 07Eu2 +(M = Ba,Mg, Ca) ; C:(SrBa)3SiO5: xEu2 +. The above raw materials were accurately weighed according to the stoichiometric ratio, thoroughly mixed, and placed in a high-temperature furnace in a reducing atmosphere for 1 h at 1 360 Â°C. The reducing atmosphere is H2 (10%) / N2. The obtained sinter is ground into a powder by an agate mortar, and after sieving, it is subjected to a process such as washing and removing impurities to obtain a finished product. The excitation and emission spectra of the obtained sample were measured by a Fluorolog 23 fluorescence spectrometer. 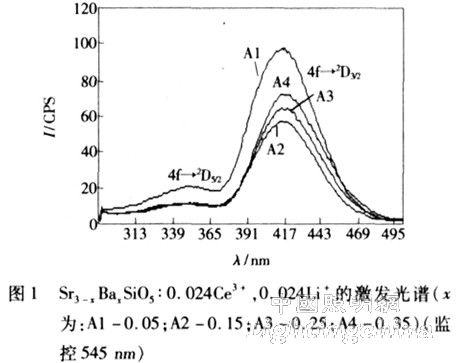 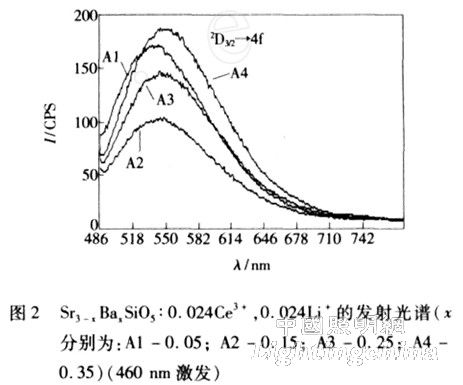 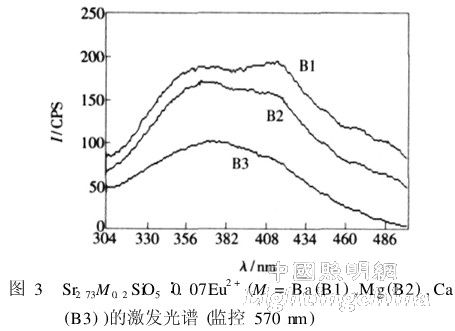 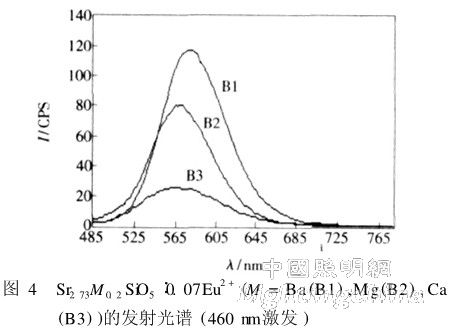